Hello again.  A few weeks ago, Daniel Lanois was inducted into the Canadian Music Industry Hall of Fame.  The CBC commemorated the event with a series of web broadcasts of Lanois being interviewed by Rich Terfry (broadcaster, recording artist, and one of the things I miss about not living in Canada) about 5 recordings he’s been a part of.  The interviews can be found here and are really worth viewing. 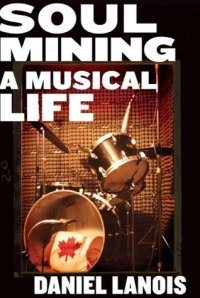 I thought I would commemorate this occasion by writing a short review of Daniel Lanois’s 2010 book “Soul Mining: A Musical Life”.  Lanois, you may know, is a music artist and producer of some of the biggest records of the last 20+ years.  Think of the best of U2’s records, Bob Dylan’s Oh Mercy and Time Out Of Mind, Emmylou Harris’s Wrecking Ball, Willie Nelson’s Teatro, and the list could (and does) go on.  On top of all of that, his own recordings are masterworks of impressionism, tone and vibe.  Even if you don’t like the songs, you have to admit that his records sound amazing!

For those of you who have come across Lanois’s 2003 SXSW keynote speech, you may be a little sceptical of his writing style.  That speech (included in the book) was as much beat poetry as anything else.  He didn’t answer the questions that people would have expected; rather he seemed to ask questions more than answer them.  That said, the speech was wonderful in that it delved into the roots of his inspiration and motivation; the questions leading the hearer to ask their own.  I’ve read it numerous times.

While Lanois’s memoir does not fall into the category of poetry, this is a much less focussed work than many would prefer.  This isn’t an insider tell-all, though one does get a glimpse into the artistic process of many of the artists he has worked with.  This is also not a recording how-to, though the techies amongst us may be intrigued by his brief asides on the merits of one mixing console over another.  So what is it?  Well…

The author is simply telling his own story, seemingly as it comes to him as one memory triggers another.  This can be very entertaining as his thoughts jumble together to give a large and impressionistic overview of his perspective on his world.  For instance the opening chapter contains thoughts on such wide-ranging topics as his childhood in French-speaking Quebec and English-speaking Hamilton, notebooks and diagrams covering every aspect of the recording of a particular track, how he got interested in music, the genesis of his recording career, Rick James, Raffi, equal temperament, Brian Eno, steel guitar, and U2.  Yes, it is as chaotic as it sounds but it is entertaining.

One of the drawbacks of this approach, which settles down somewhat after chapter 1, is that there is little sense of progression or development in his ideas.  There are LOTS of ideas in this book but I kept wanting to ask, “What year are we in?” as thoughts unfold in regard to Eno, U2, Robbie Robertson, Dylan, and the Neville Brothers.  Since he has worked with some of these artists multiple times over many years it was hard to know if a story or conversation was with Bono in 1983 or 2009.  It was all slightly disorienting: at one moment the reader thinks the time is the late-90s in California only to discover that it is actually the late-70s in Hamilton, Ontario.  As I said, there are lots of ideas and perspectives on many subjects but the way he came into those perspectives is often not clear.  But maybe giving us a linear storyline would betray the fluid nature of the development of ideas.  Few of us have just one thread for an idea or perspective that we can then trace back to one individual source.  Maybe Lanois’s approach speaks to the way thoughts evolve and change direction over time.  Again, the word ‘impressionism’ comes to mind.  Lanois isn’t trying to write a step-by-step version of his life but rather a story told in such a way as to inspire.

And inspire it does!  Though the stories of his childhood are overly romanticised, one cannot shake the sense that he is an ordinary kid.  Displaced and from a broken home he might even fall into the category of underdog.  Yet this kid has drive and an ability to focus.  That, and a strong dose of right place/right time, has enabled him to become one of the great producers of all time, as well as an accomplished artist in his own right. And in the way he tells his story, he makes the reader believe that the same is possible for them – whatever it is that one wants to achieve.

This book, like his music, is full of heart and soul.  He’s got it in spades and he encourages it in everyone.  To quote from the last few lines of his SXSW speech:

Read this book; it’ll help you up your own mountain.